He Gave The World A New Conception Of Itself!

From Samuel Eliot Morison's masterful "Admiral of the Ocean Sea: A Life of Christopher Columbus": 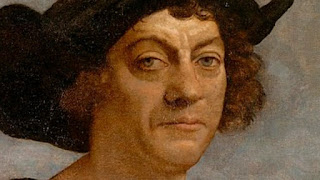 "At the end of 1492 most men in Western Europe felt exceedingly gloomy about the future. Christian civilization appeared to be shrinking in area and dividing into hostile units as its sphere contracted. For over a century there had been no important advance in natural science and registration in the universities dwindled as the instruction they offered became increasingly jejune and lifeless. Institutions were decaying, well-meaning people were growing cynical or desperate, and many intelligent men, for want of something better to do, were endeavoring to escape the present through studying the pagan past. . . .
Yet, even as the chroniclers of Nuremberg were correcting their proofs from Koberger’s press, a Spanish caravel named Nina scudded before a winter gale into Lisbon with news of a discovery that was to give old Europe another chance. In a few years we find the mental picture completely changed. Strong monarchs are stamping out privy conspiracy and rebellion; the Church, purged and chastened by the Protestant Reformation, puts her house in order; new ideas flare up throughout Italy, France, Germany and the northern nations; faith in God revives and the human spirit is renewed. The change is complete and startling: A new envisagement of the world has begun, and men are no longer sighing after the imaginary golden age that lay in the distant past, but speculating as to the golden age that might possibly lie in the oncoming future."

Some say that Christopher Columbus belonged to an age that was past.  Yet, he proved to be a visionary, and clearly, he became the sign and symbol of a totally new new age of hope, glory and accomplishment. His medieval faith may have been rooted in the past but it nonetheless led him to a modern solution: expansion. His legacy cannot be denied nor can his extraordinary place in history be erased.
H/T: facebook friend
Posted by Dan Cirucci at 7:52 PM