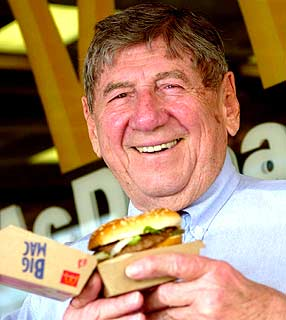 Jim Delligatti
He's not as well known as some of the other Italian Americans we've been spotlighting this month but he's still quite significant.
Michael James Delligatti's father’s job forced the family to move frequently. He never went to college and started his career working at a chain of family-owned dairies and restaurants in the 1950s. By the mid-50s, Delligatti wanted to open his own restaurant and attended a restaurant show where he got the idea to open one of the first McDonald’s franchises.
By the 1960s, he was operating a dozen stores in the Pittsburgh area. Delligatti had an exclusive territorial franchise for metropolitan Pittsburgh but was struggling with sub-par store volumes. He decided that the only way to broaden his customer base and increase sales was to add to the McDonald’s menu.
For the next few years, Jim Delligatti spent his time and energy creating a new product for the McDonald’s menu. His eventual idea? Two-all beef patties, special sauce, lettuce, cheese, pickles and onions on a sesame seed bun. Jim Delligatti invented the Big Mac! Original names for the burger included “Aristocrat” and “Blue Ribbon Burger.” Finally, the company settled on the name Big Mac which was suggested by an advertising executive.
One of Delligatti’s obstacles in getting the Big Mac approved for sale was its proposed price of 45 cents—twice that of a regular cheeseburger. But the product was such a hit that the price concern no longer mattered. The rest is history!
Part of a month long series spotlighting a different accomplished Italian American every day during Italian American Heritage Month.
Posted by Dan Cirucci at 7:40 AM