Numerous sources are reporting that Hollywood icon Tony Curtis has died.
He passed away at his home in Nevada and reportedly suffered from chronic obstructive pulmonary disease.
Tony Curtis was more than just a pretty boy. He was one of the most colorful and accomplished actors in the history of Hollywood. And, he starred in some of  Tinseltown's classic features including Some Like It Hot and Spartacus.
Tony had an endearing quality about him. He brought a certain vulnerability to a role. But he could be tough, too. And his voice was very distinctive. He was unique.
Here's what I wrote about him back in February, '09: 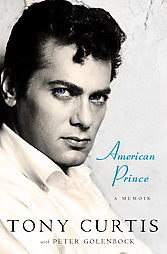 The publisher' pitch on this says: In a candid, deeply personal memoir, the legendary actor chronicles his odyssey from hard-knock childhood as the son of immigrant parents to Hollywood success, detailing his wild days as a Tinseltown playboy, the film industry during Hollywood's Golden Era, his destructive drug addiction, his family, colleagues and co-stars, and his life as an artist at the age of eighty.
It's a helluva story.
But apparently Curtis told much the same story a number of years ago in a memoir he'd "written" with Barry Paris.
This time around, Curtis (whose new co-author is Peter Goldenbeck)) still seems to be obsessed with matters that have troubled him all his life:
1) He can't understand why some people don't like him. He desperately wants you to like him.
2) He loves women a lot and despite his early "pretty boy" looks (that got him into the movies in the first place) and the fact that he played a couple of roles that suggested he may be gay (or at least bisexual) you should never, ever, ever think he's gay. He's not. In fact, he's always been crazy for big-busted women.
3) He seems to think it's perfectly OK for a married man to have affairs but when his various wives played the field, it drove him crazy. He simply couldn't tolerate it.
4) He never had much of a relationship with his children or grandchildren because he was too busy making movies. A guy's gotta work, ya know.
5) He had a poor, unhappy childhood (which was marked by tragedy) and a very troubled relationship with his parents. It was tough. Real tough.
6) Did you know that he's Jewish? Well, now that you know you may also understand why life was difficult for him and why he didn't get some choice roles. You see, there are a lot of anti-semites in the world.
7) A lot of people didn't like him because of his beautiful thick hair and his good looks. It's not easy being devastatingly handsome.
8) He should have never said that kissing Marilyn Monroe was "like kissing Hitler." He doesn't know why he said that and he still feels bad about it.
Well, you get the idea.
Posted by Dan Cirucci at 8:46 AM